“Toggle Visibility” is a Cinema 4D Tag plugin tool that will speed up your modelling and render process. 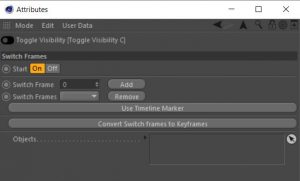 And you can do this for not just one object, but a list of objects if needed.

Note: This plugin is the first plugin under the new support arrangement.
We have changed our policy. Instead of the license check, we now offer a one year support and do not ask for your Cinema 4D serial anymore.